Smart Homes are going to be the trend of the coming future. Different smart home technology is on its way to make the future homes smarter. Recently, a new health monitoring technology – Vital-Radio has been introduced by the researchers from Massachusetts Institute of Technology (MIT). It is an intelligent wireless sensing technology device that can be used as a smart home technology for tracking resident’s health status like heartbeats and breathing.

Eventhough different wearable biosensors have been introduced to monitor health status; these biosensors come up with different disadvantages. For example, take the case of breath and heart rate monitoring sensors. These are found to be inconvenient and cumbersome since users have to wear them at their chest and nasal probe. Also, some of them have lower accuracy and others cause skin irritations. In such a situation, Vital-Radio will surely bring a turning point to the field of Medical Electronics and as a smart home technology.

It is a radar like system placed inside a WiFi box. It can record data related to heartbeats and breathing without the use of any wearable biosensors. This device has the advantage that it can track the health status of multiple users simultaneously. Also, there is no need to face the device directly or get notified about its presence.  Vital-Radio can track the health updates related to breathing and heartbeats even if the user is 8 meters away from the device. Hence this device can be considered as a Wireless Smart Home Technology for Monitoring Health Status.

Working of Vital-Radio as a Wireless Smart Home Technology

Vital-Radio being a FMCW (Frequency Modulated Continuous Wave) radio works similar to the radar. It uses wireless signals inorder to monitor chest movements and heartbeats. This wireless signal (sweeps from 5.46 GHz to 7.25 GHz) is generated from the Vital device at every 2.5 ms. After the transmission of the wireless signal, the device measures the time taken by the signal to reach the human and reflect back to the antennas present in the Vital device. The reflection time of the signal is used to find the distance from the device to the human. This distance varies periodically with the user heart beats and inhales and exhales. This device will capture all minute changes in distance and helps to extract the vital signs of the user. The extracted signal is then passed to the PC via Ethernet for real time process.

In short the Vital Radio works by following the below steps: 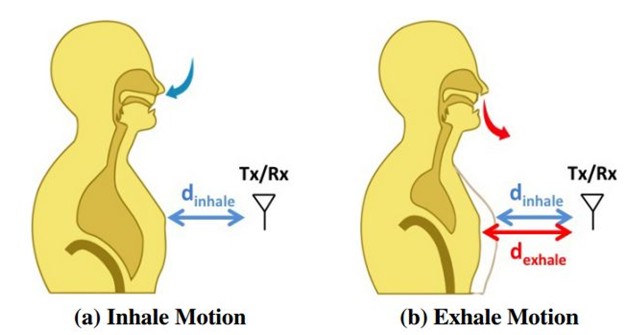 Consider a person inhaling. During this process, chest of the person will expand. While exhaling, the chest contracts. Thus, we can say that during inhaling, the chest is closer to the Vital-Radio and during exhaling; chest is away from the device. This distance dinhale and dexhale is noted and the phase is calculated as per the equation.
φ(t) = 2π d (t) /λ

Heartbeats cause small movements to different parts of the human body. These movements will cause small changes in the wireless signal transmitted from the vital radio, thereby causing the Vital Radio to capture the heartbeat. The extracted signal is then passed to the PC via Ethernet for real time process.

Thus Vital Radio is a wireless smart home technology device that can be placed inside a home router, which provides you two advantages- monitoring your health status and at the same time providing you internet connection….. MIT researchers are working to bring more accuracy to the device. In future this device will be able to track the emotion rate of humans and also monitor the heart rate of a fetus in the womb.