When we talk about rectifiers, the first thing that comes to mind is power supplies, but rectifiers are also used in many other circuits. Converting AC to DC is necessary in many high-precision signal processing circuits, and most circuits that measure real-world quantities first have to rectify sensor voltages. But even though regular diodes and bridges are adequate for many rectifying jobs, sometimes a different approach is needed.

A common rectifying circuit you build for a power supply will work perfectly, but it will be completely useless for high-precision signal processing circuits. The reason is simply that in many applications the signal we would like to rectify will be less than the voltage needed to turn a diode on. Even small-signal germanium diodes require about 0.3 volts to turn on. That may not seem like much, but, if you are working with signals in the millivolt range, you’ll have to find a way to handle the problem. The problem can be solved by using a precision rectifier.
The precision rectifier, also known as a super diode, is a configuration obtained with one or more operational amplifiers in order to have a circuit behave like an ideal diode and rectifier. Circuit designers have two standard methods for designing a precision rectifier. They can amplify the AC signal and then rectify it, or they can do both at once with a single operational amplifier. The latter method is often considered a much better way to get the job done.

The one-step approach to building a precision rectifier requires some way of isolating the positive and negative halves of the incoming AC, but after that AC has been amplified to a usable level. The circuit shown in figure 1 is a straightforward way of combining both amplification and rectification. Any op-amp IC can be used in this circuit. High input impedance, low offset voltage, frequency limit, and slew rate are among the factors you should consider when choosing an op-amp. Examine the requirements of your application and choose an appropriate device.

The circuit's theory of operation is similar to that of a diodes-only rectifier. During the positive half of the AC cycle the output of the op-amp forward biases D2 and current flows only through that diode. So, the output is zero because one side of R2 is connected to the virtual ground, and there is no current through it. The D2 diode prevents the op amp's output from swinging to the negative supply rail.
During the negative half of the input swing, however, D1 is forward biased, so current will flow through it and through R2. Therefore, DC will only show up across R2 during the negative part of the incoming AC cycle. Because we’re rectifying the voltage in the feedback loop of the op-amp and not at its input, the circuit will be able to handle very small AC signals. The inherent high gain of the op-amp allows us to rectify signals that are substantially below the voltage needed to forward -bias even small-signal germanium diodes.
When the input is negative, it is amplified by the operational amplifier which switches the diode D1 on. Current flows through the load and, because of the feedback, the output voltage is equal to the input voltage if R1=R2. The actual threshold of the super diode is very close to zero, but is not zero. It equals the actual threshold of the diode, divided by the gain of the operational amplifier. 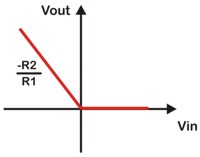 The circuit of figure 1 has the benefit that the op-amp never goes into saturation, but its output must change by one diode voltage drop (about 0.7V) each time the input signal crosses zero. Hence, the slew rate of the operational amplifier and its frequency response (gain-bandwidth product) will limit high frequency performance, especially for low signal levels. However, an error of less than 1% at 100 kHz is possible when we use high speed op-amps. This circuit also has another limitation. The input impedance is determined by the input resistor R1. R1 usually has a limited value, thus the circuit must be driven from a low-impedance source.
The op-amp shown in Fig.1 is set up as an inverting amplifier, so the output waveform will be 180° out of phase with the input. The gain is equal to R2/R1, so, it will be equal to 1(0db) if R1=R2. You could switch inputs on the op amp to turn it into a non-inverting amplifier, but the phase difference comes in handy if you want to build a precision full-wave rectifier.
The typical waveforms of the circuit of Figure 1, are shown on figure 2b. The waveforms are from tests on a real circuit that uses the MCP661 op amp, two MBRM110LT3 Schottky diodes, R2=R1=1K and the load resistance is 1K. The input frequency is 500Hz.

At this point, one might ask if it is possible to build a simpler precision rectifier which will use only one diode. The answer is that such a basic configuration exists and it looks like the circuit presented on figure 3. This basic configuration has a problem so it is not commonly used. When the input becomes (even slightly) negative, the operational amplifier runs open loop, as there is no feedback signal through the diode. With a typical high open loop gain operational amplifier, the output saturates. If the input then becomes positive again, the op-amp has to get out of the saturated state before positive amplification can take place again. This change generates some ringing and takes some time, greatly reducing the frequency response of the circuit.

We can turn a half-wave precision rectifier circuit into a precision full-wave rectifier by using a weighted inverting summer, as shown in figure 4, but a bit of thought has to go into picking the summing resistors. As shown in Fig. 4, we're adding the original AC signal and twice the output of a unity-gain (0db) half-wave rectifier. 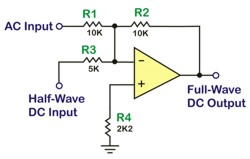 If R1 and R3 (in Fig. 4) had the same resistance, the output of the half-wave rectifier and the negative half of the input AC would be equal in magnitude, but 180° out of phase, as shown in figure 2b. In other words, the net result would be a voltage of zero. We can solve that problem by mixing in twice the half-wave voltage. If you decide to build the full-wave rectifier, it’s a good idea to use an IC, which has two operational amplifiers in its package.

In the circuit of figure 4b, we're adding the original AC signal and the output of an arbitrary gain half-wave rectifier. This is somehow different from the case of figure 4, when we assumed that the half-wave DC input was connected to a unity-gain half wave rectifier. Since R1 and R2 give the gain for the first stage and R3 and R5 for the second stage, in order to make the circuit to behave as a full wave rectifier, we must get the same amplitude for both cycles. Thus, we must choose R1 =R3 =R4 and R2=R5 =2xR1. R6 is added to minimize the error caused by the input bias current. A good choice for R6 would be a value of about R4·R5/(R4+R5)

To obtain a good performance for the two stages circuit, the tolerance of resistors R1 to R5 should be 1%, or better; this makes the gains (for negative and positive Vin ) to match well. The circuit in Figure 4b has a good linearity, down to a couple of mV at low frequencies, but the high-frequency response is limited by the op amp bandwidth as always.R6 is added to minimize the error caused by the input bias current.

Full-wave rectification can also be achieved by inverting the negative halves of an input-signal waveform and applying the resulting signal to another diode rectifier. The outputs of the two rectifiers are then joined to a common load. This idea is described in figure 5. The waveforms at various nodes are also shown in the same figure.

Lets see how the circuit of figure 6 operates:
Consider the case of a positive input at A. The output of A2 will go positive, turning D2 on, which will conduct through RL and thus close the feedback loop around A2. Thus, a short circuit will established between the two input terminals of A2. At the same time, the voltage at the inverting input terminal of A2, which is the output voltage of the circuit, will become equal to the input. Thus no current will flow through R1 and R2, and the voltage at the inverting input of A1 will be equal to the input and hence positive. Therefore the output terminal (C) of A1 will go negative until A1 saturates. This causes D1 to be turned off.
Next consider what happens when A goes negative. The tedency for a negative voltage at the input of A1 causes C to rise, making D1 conduct to supply RL and allowing the feedback loop around A1 to be closed. Thus a virtual ground appears at the inverting input of A1, and the two equal resistors R1 and R2 force the voltage at C, which is the output voltage, to be equal to the negative of the input voltage at A and thus positive. The combination of positive voltage at C and negative voltage at A causes the output of A2 to saturate in the negative direction, thus keeping D2 off.
The overall result is perfect full wave reactification, as represented by the transfer characteristic in figure 6. The precision is a result of placing the diodes in op-amp feddback loops, thus masking their nonidealities. The circuit of figure 6 is one of many possible precision ful-wave rectifiers or absolute-value circuits.

A full wave precision rectifier can be made also by using a diode bridge. One such arrangement is shown in figure 7. This circuit can be useful for instrumentation applications because it can provide a balanced output (on RL) and, also a relative accurate high-input impedance.
The circuit causes a current equal to |ui|/R+RL to flow through RL. Thus, the current or the differential voltage in RL's terminals is propotional to the absolute value of the input voltage ui. All the nonidealities of the diodes are masked by placing the bridge circuit in the negative-feddback loop of the op-amp.
When uA is positive, current flows from the op-amp through D1, RL, D3, and R. When ui is negative, current flows into the op-amp output through R, D2, RL, and D4. Thus the feedback loop remains closed for both polarities of ui. The resulting short circuit at the input terminals of the op-amp causes a replica of ui to appear across R.